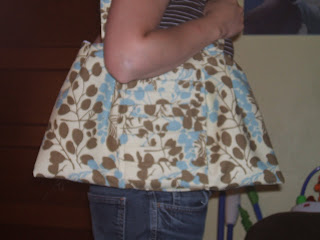 Woot! The sewing bug has bit again. And the venom is sweet.

I tried out another bag from Handmade Home by Amanda Blake Soule. This one is called the Mama Bag. That's right. I sewed myself a purse! Mr. Wonderful laughed at me because he thinks I have too many purses. I did buy myself a purse this summer at a rummage sale, but believe it or not, it's TOO big. It's so cavernous that I can never find what I need. I wanted to downsize. And I wanted something less...hippie-ish. Don't get me wrong, I love hippies! I just don't want to carry their purse all the time. :0) 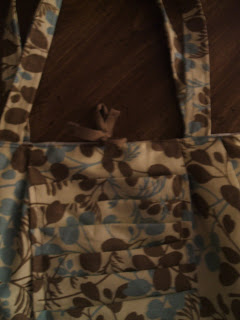 I added some pleats to the front ala Gussy. Gussy makes me want to pleat and ruffle everything in sight. 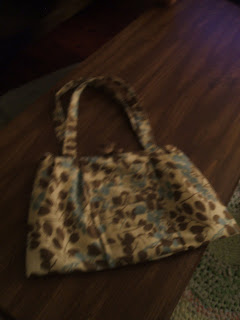 Can I tell you that I was like a woman possessed during this project? I finished it in a day, using one whole 2 hour nap and probably another hour during the evening. I couldn't stop myself! I am so excited about how much better I'm getting at sewing! Next I want to try tackling patterns. Patterns are very intimidating to me. With their fragile nature and their tracing chalk. They are kind of like bobbins to me. Although I think I am slowly conquering the bobbin!
I think what I have learned from sewing is to just go for it. Yeah, maybe your idea won't work, but you can always tear it out and try it again. And I've learned to be a little more careful with my work. I think having a young baby I got in the habit of being happy if things just got done, and didn't worry about the quality of the job. So I took my time with this purse, and got a little nitpicky with it. It paid off!
Now get out there and sew!
Posted by Ally at 12:02 PM 1 comment: Links to this post

I don't know if I've mentioned it on the blog before, but we received an awesome gift from a friend for our baby. She works for a trade magazine that specializes in baby gear and thus gets a bunch of awesome freebies through work. She passed along a COMPLETE nursery from Cocalo Couture, and some other things to boot which totally floored us and made outfitting Ava's room a breeze. 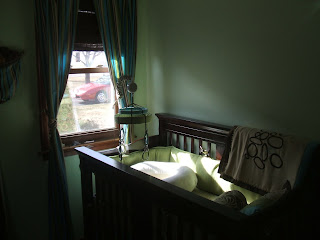 I love all of it, but since our nursery is small, we has to put the crib next to a window. If you have kids you know there are all sorts of safety precautions to make when it comes to windows. It's gotten to the point where I wasn't totally comfortable having those long drapes so close to her when she isn't supervised. (Choking hazard? Suffocation? There is so much to worry about!)

So I took a cue from some other bloggers and decided to try making some Roman Shade looking things. I read some other blogs, here, here, and here. Then I decided to wing it and make it up as I went along. I knew I wanted to just keep the curtain rod. No cornice or anything fancy. I liked the Nester's idea of just tying it up with ribbon, but the curtain was way too long to do that and I didn't want to cut it down. So I did sort of a fusion of a Roman Shade tied up. 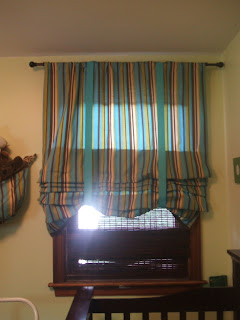 Not perfect, but safer. And I safety pinned up the ribbons on the bottom, so if she ever gets tall enough to reach it I can always pin it up higher. :0)
I'm linking up to Thrifty Decor Chick's Before and After Party!
Posted by Ally at 8:38 PM 2 comments: Links to this post